2003 Courier Mail Player of the Year 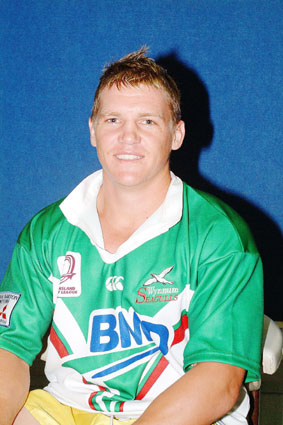 Denny Lambert “Courier Mail Player of the Year” for 2003

A former North Queensland Cowboys halfback, Lambert had an off-season in France before joining Wynnum at the end of last year.  Lambert, 22, made his NRL debut against North Sydney in 1998 while attending school in Townsville.

The Cowboys were thrashed 62-0 that day and Lambert struggled to get a look in the following year when the Cowboys signed Noel Goldthorpe. After winning The Courier Mail award, which brings with it a trophy and cheque for $3000, Lambert is on the verge of a return to the NRL following in the footsteps of recent winners Jason Bulgarelli and Adam Mogg, who now play for Canberra.

“You never give up hope, but if the chance doesn’t come I am more than happy to continue playing for Wynnum,” Lambert said.  “It’s a great club, on and off the field, and the supporters are something else. Sometimes I wish I was on the hill cheering with them instead of being out on the field. “They know how to have a good time.”

Brisbane Souths prop Stanley Fau was named the Carbine Club colt of the year and received the Peter Gallagher Trophy. Last year’s winner was David Stagg, who now plays for the Broncos.  The Brisbane reserve grade player of the year is Darren Ireland, of Wynnum, while Burleigh’s Australian Schoolboys halfback Ben Green was named best player in the South East Division colts competition. Green has been signed for 2004 by Burleigh’s NRL affiliate, the Bulldogs.

Other award winners named at last night’s black-tie function at the Tatts Club were – representative player of the year: Shane Perry (Redcliffe); referee of the year: Adam Neale coach of the year: Neil Wharton (Redcliffe).  Redcliffe was presented with the Spotless Catering award as club champions for the sixth year in a row.