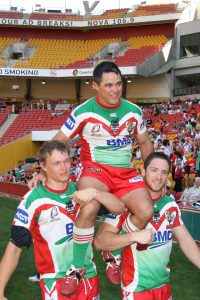 Wynnum Manly’s Ron Troutman is carried off the field by team mates in his last game before retirement.

A star-studded Wynnum Manly FOGS Cup team has topped off a stellar season, thrashing Ipswich 52-18 in the Grand Final at Suncorp Stadium.  The Seagulls were ahead by a phenomenal score of 32-0 after just 27 minutes, the resultof six dizzying tries.

Remarkably, the Baysiders had another try denied in the same period, with winger Ryan Brown pushed into touch inches before the line.
The massive victory was the largest grand final win at the same level since 1972 when Norths defeated Valleys by 45-3 in the old Brisbane Rugby League Reserve Grade.

A humbled Ipswich was left to lick its wounds, but did so in the knowledge it had faced one of the most well-credentialed reserve grade outfits ever assembled.

Wynnum Manly’s side included former NRL prodigies Steve Irwin (Brisbane Broncos), Daniel Frame (Melbourne Storm) and Herewini Rangi (NZ Warriors), as well as Wizard Cup veterans Ron Troutman and Gareth Turton.  Turton, who returned mid-year from playing in France, was devastating in the opening sequences, while Troutman kicked a goal from the sideline after the fulltime siren to end
his long and colourful career.

Ipswich was also without its two best attacking weapons in Brendon Marshall and Brooke Alofipo.  Marshall was out with a serious ankle injury, while Alofipo was suspended mid-week for a dangerous throw.  Conversely Wynnum didn’t have to look far for penetration at all, bristling with impact players across the park.

Backrower Turton had two big busts early on and, while the backs scored the majority of tries, lock Frame grabbed a double to keep the forwards among the thick of things.  After the lightning-quick start the Seagulls only took their foot off the pedal slightly, not scoring for an entire 18 minutes.

Indeed, the score in the second half was much more palatable for Jets fans, scoring three tries to Wynnum’s four to add a degree of respectability.

Among those was a sensational four-pointer to young Cody Fullarton, who benefited from a slick chip and regather by Steve West from 40m out.  But the undeniable premiers finished the game just as they started it, fullback Chris McQueen ending a great performance with a try right on the siren, dutifully converted from the difficult angle by departing club legend Troutman. 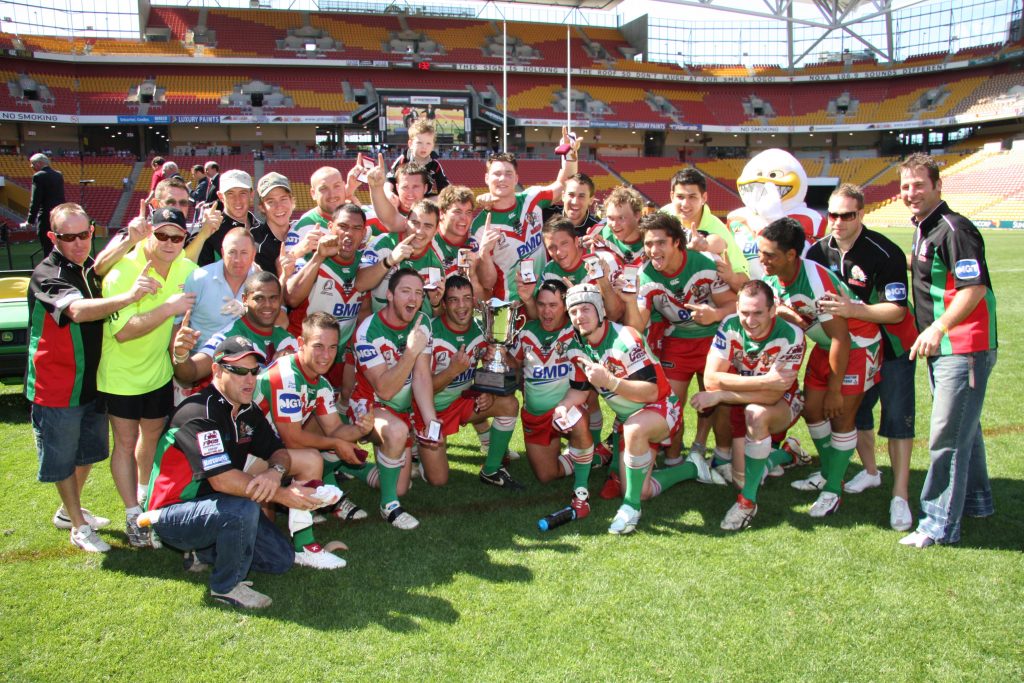