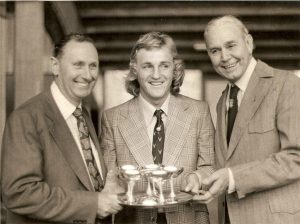 Who’s it going to be?  This is the question the Brisbane selectors were asking as they met to choose the ANZ Bank Colt of the year.  And the answer was Gary Seaton of Wynnum Manly.

In 1975 the winner of the ANZ Colt of the Year award was selected from players who have graduated from local Brisbane Clubs and who had not turned 21 at the star of the year.  For the player to be qualified he must have played eight A Grade games for the season.

In the inaugural year of the award, Brisbane Selectors chose the Colt of the Year.  The selectors are Eddie Brosnan (Brothers), Mick Retchless (Valleys), Cliff Green (Easts and Phil Pascoe (Wynnum-Manly)

Gary Seaton was presented the award by Mr. Sel Bosel and the management committee chairman Arthur Sparks.  The award included an ANZ savings bank of $200.

Gary, the Wynnum Manly halfback is a robust player, untiring over 80 minutes.  He played in the second row being paired with another outstanding young Wynnum Manly player, Neil Kingston.