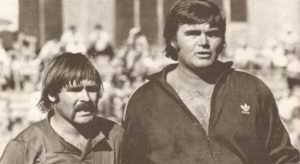 What “miracle” does the “magic sponge” contain?  Nothing more than a hefty splash of ice cold water, according to the Les Jones formula.  Les, Wynnum-Manly’s trainer, for three years, is one of the first aid men to tend to minor injuries while the game is in progress.

This flow-on treatment of minor injuries has enabled matches to be played with a minimum of interruptions. The sight of trainers dashing across field to casualties, “magic sponge” dripping in their hands, has become a familiar sight at Brisbane matches.

The value of that “magic sponge” is the therapeutic shock of cold water on the back of the neck, according to Les who, like most trainers, is skilled in first aid. Les says that in the three years he has been with Wynnum-Manly there have been great advances in training and conditioning players.

“Even in that time, the game become much faster,” he said.

“The accent now is on sprint training. Players are fitter. They have to be to stay in A Grade where the big money is.

“Players are more conscious of fitness. As an example, our hooker, Gordon Haigh, trains three nights a week.  On top of this he spends two nights in the gymnasium. “Now we have doctors with the clubs, and this is typical of the sophisticated approach to Rugby League.”

Fitness meant fewer injuries – which, in turn, meant that the “Magic sponge” was not needed so frequently.