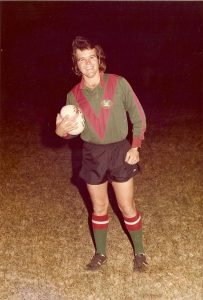 The Third Graders took the honours when they defeated Wests 22-13 in a match played at a fast, furious pace.

The Seagulls drew first blood when they kicked a penalty goal through Jeff Phillips in the ninth minute, then shot to a 7-nil lead when Roy Costello scored after an up and under.  Wests kicked off and tight defence pinned Wynnum down in their own territory.  Wests won the scrum and scored a try after a couple of tackles and the Seagulls lead had been pegged back to two points.  With halftime approaching boths sides defended grimly to hold onto their gains.  Just before the halftime hooter the Seagulls played top class football to put Steve York over and with the conversion by Phillips Wynnum had a lead of 12-5.

The second half saw the Seagulls kick off deep into Wests territory and pinned them down with strong tight defence.  From a scrum Wynnum received a penalty and Phillips goaled to give Wynnum a nine point lead.  From the kickoff, Wynnum played strong attacking football and made their way into Wests 22 metre line where Bob Hardie snapped a field goal to give Wynnum the lead by ten points. 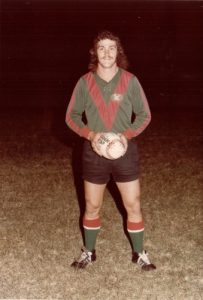 Just after the kick off Wynnum dropped the ball and Wests scored narrowing the Wynnum lead to seven points.  Wests were endevouring to score another try to get back into the game but the Seagulls defence strong  and showed Wests they meant to hold them out.  Wests won the scrum inside Seagulls territory but the pass went astray and Wynnum played good football to put Steve York over for his second try.  The Seagulls now had an enormous lead of 12 points and with only eight minutes remaining all they had to do was tackle.  Phillips again kicked a goal and Wynnum had it won.  Wests scored a converted try in the final minute and fulltime found Wynnum claiming victory 22-13.

Jeff Phillips was voted Player of the Match with a perfecting kicking record of six goals from six attempts.

Congratulations goes to Boyd Hodges and the team on a big season and a well deserved premiership title.