“Please don’t lay it on, mate.  I don’t go for that stuff at all.”  This sincere request came from Wynnum Manly coach Jim Lewis and the message was that he did not want publicity around himself.

For the team, yes.  They were the ones out there, trying like mad, copping the bruises, the bouquets and the brickbats.

But according to Jimmy Lewis philosophy, he is the man in the background.  He is the coach, not the flag waver, not the headliner, nor the mouth.

While some other coach might not object to a column or two oof copy about themselves, publicity is not a Jim Lewis liking….as you may have gathered from his quote above.

Even after last Sunday’s upset win by Wynnum Manly over Wests, he still was guarded about the Lewis role in the Wynnum Manly picture.

However, it is clear that Jim is proud of his team.  “They can do anything if they put their mind to it,” he told the Rugby League News.  It was clear that he was proud of every player in that Seagull 13.

While Wynnum Manly face a tough struggle to meet make the final five, going by the Lewis tradition, it would not be surprising to see them in the semi’s in 1976.

Jim has been coaching with Wynnum manly for the last 16 years.  He has coached three premiership sides. The 1969 Colts team, the third Grade in 1972 and the Reserve Grade in 1975, 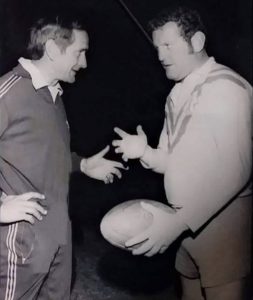 Jimmy Lewis and Neville Hornery discussing tactics at training in 1976

Jim was also a handy A grade player for Souths back in the 1950’s, he practically played in every position in the Souths backline over his career.  His playing experience, plus the coaching from under 15’s up, gives him heaps of background.

The fact that he has had a team every year, in junior and senior grades carries as much weight in coaching efficiency as any reputation on the Lang Park circuit.  Jim Lewis has a reputation for getting teams up to a big finish and it could be that way this year.

The Seagulls have shown that they can match it with the best of them.  This season they have beaten Wests twice, Easts and Brothers.  Lewis and his team have a big challenge from now on.

If football fortune smiles on the Seagulls, maybe Jim Lewis then will relax that caution habit and say a few loud words.

Photo Sources: The Lewis Collection and the Rugby League News, 1976.