Wynnum Manly’s Tony Jemmott joined an illustrious list of previous winners, when he was crowned the ANZ Bank Colt of the Year last week.  The award is represented by the best young player in the Brisbane Rugby League competition.

Former winners Wally Lewis and Greg Conescu, were on hand when Jemmott was presented with his award by ANZ state manager, Bernie Dawson.

Jemmott then made his way to Lang Park on Sunday immaculately attired in his Wynnum Manly blazer to accept his award in front of a packed Frank Burke Grandstand at Lang Park.  He said the event was nerve-wracking. 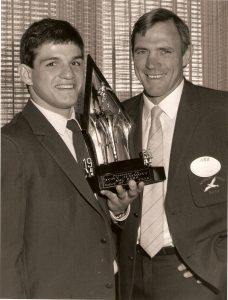 Since the award commenced the winners have been as follows:

This Sunday is now on Jemmott’s mind, taking on the aggressive Brothers pack in the Preliminary Final.  If Wynnum are successful they will play Souths in this years Grand Final.