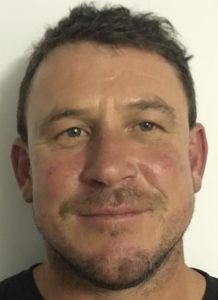 Question 1: Clayton, when did your love for Rugby League commence?

Clayton: Sitting down with my family at home watching the game of the day which was called the Winfield Cup and saying, “I love this game and I am going to go out and do that”.

Clayton:  I started with St John Vianney’s at Manly, then I played for Wynnum State High School.  We made the semi finals of the Commonwealth Bank Cup (National Schoolboy Competition), we had a good side, I played up a year with Jeff Wittenberg.  The side contained the likes of Danny Grimley, Paul Green and Craig Greenhill.  It was an outstanding schoolboy side.

Question 3: Did you ever play for the Wynnum Manly juniors?

Clayton: Yes I did, we had a great side we won the competition four years straight from the Under 15’s through to the 18’s.  Again, we had some outstanding players in that side Luke Jorgensen, Steve Carsburg, Jason Predl, Jeff Wittenberg, Brett Greenhill, Jason Sheridan just to name a few.  On a Sunday we had more people watching our games at Kitchener than the seniors did at Kianawah.

Question 4: Did you excel at any other sport outside Rugby League?

Clayton: Have a look at me, what do you reckon.  You were training and keeping fit for a good nine months of the year dedicating yourself to league, so the answer is no!

Question 5: You made your A grade debut in 1993 for Wynnum Manly, what do you remember from that special moment? 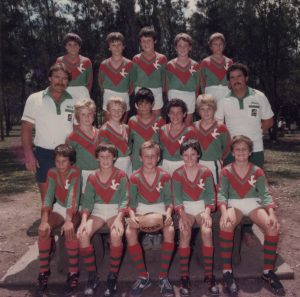 Question 6: You went to play for Logan City Scorpions in 1999, being a Wynnum boy through and through what made you want to leave the club?

Clayton: Well Wynnum were buying players from all the way around the country and offering out all this money, when I was there and I was a local junior and played very well the year before and felt like I just got shit on.   I received a small offer from Wynnum and I said to the club its no good buying all these players, you should look after us and we will do the job.  I let the club know that I had received an offer from Logan City and they couldn’t match it so I left.

Question 7: Who was the best player you played with?

Clayton: Graham Cotter from Redcliffe in representative football, he was very quick as a front rower, he could tackle, he was smart, could kick a ball he could do everything from AFL to soccer.

Question 8: Who was the best player you played against?

Clayton: Troy Lindsey is right up there, Adam Starr would get a mention.  Since I was 19 these are two blokes I always found it tough to play against.

Question 9: Who was the hardest player to tackle?

Clayton: Carl Webb, short to the ground and very fast.  When he was at Toowoomba and they would put forty on you, unfortunately you just couldn’t stop him, he was a big boy!

Question 10: Who was the hardest tackler you played against?

Clayton: Russel Loff from Redcliffe, he is one of the two best tacklers I know, I have only been hit by one of the them and that is Russell, he had the same technique as Brad Nairn who could tackle.  Russell would just line you up and his timing was superb, he would get down low and keep his head up and he comes up under you.

Question 11: What was your favourite playing position?

Clayton: Second row as you can run out wide and I always fancied myself as a bit of a ball player, senior coaches unfortunately would just pick me in the front row.  I was chosen as a prop in a representative team when I was 16 and Dad let the coach know on more than one occasion that I wasn’t a prop, I was a second rower.  I played the first game at prop and almost got player of the match and in the second game I did, my Dad had nothing after that and I remained a prop for the rest of my football days. 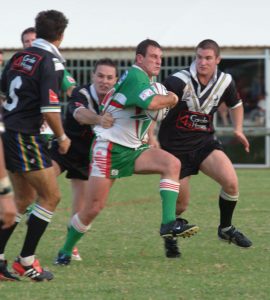 Clayton Maher bursts through the defence against Souths Magpies in 2004

Question 12: Who was best all time player you ever saw wearing a Wynnum Manly jersey other than Wally Lewis?

Clayton:  I had a few as a kid when I went to watch Wynnum, they would be Mal Green and Brett French.  Mal was just tough and hard and I just loved Brett French he was very handy.

Question 13: Wynnum Manly make the 1995 Grand Final and you were rank outsiders, how was the build up to the day and the game itself?

Clayton: The week before we played the Preliminary Final against Brothers and we are down, Ricky Taylor hits this bloke from Brothers beside the posts before he scores, if Taylor doesn’t hit him, we don’t win, we don’t play in the 1995 Grand Final.  He hit this bloke from Brothers, he was about to score straight under the sticks so and we ended up winning 22-20.  I just said to myself during the game thank god for that.

In the build up to the Grand Final, we had nothing to lose because the week before was our Grand Final to get into the Grand Final.  I said to my old man, everyone said we were going to get done, as we had been in three semis to get here and that we were gone, as they had smashed us in the semi final the previous fortnight.  We just cruised in training, had a good week, everyone was happy, we were just relaxed, nothing changed we had beat Brothers and got on the drink to 2am the next morning.  The players were sore so we didn’t get belted at training, just a bit of ball work and we said lets go out and see if we can do this together as a team and it paid off.

The game itself was good it went quick, Kougari Oval that night was good, having the truck on the field and all the shit you could do back then, which they don’t do now, that is something I will never forget, that was awesome.

Clayton: I knew about three quarters of the way through the 1996 season, when I played in the City Residents team against a bloke called Michael Searle, he played for QLD country.  His old man was Tom Searle and he was scout in the Northern Rivers and Michael must to said something to his old man.  He did kick me in the shins a couple of times, anyway after that game I started getting the phone calls, it was Tom that called me.  Tom told me there may be something down here if you’re interested, we want to take two or three of the Residents players, so they took me, Tom O’Reilly and Shaun Valentine.  They just took a gamble on State League players instead of looking to Sydney.

Question 15: Who did you make your NRL first grade debut against?

Clayton: It was Newcastle, the opposing front rowers that day were Paul Harrigan and Tony Butterfield.  I was coached by Phil Economidis 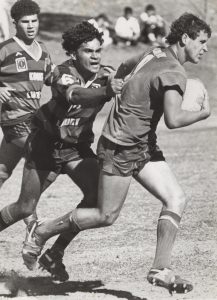 Clayton: My brother Nathan, my coach at the time Geoff Naylor in the off season said to me your brothers going very well.  A week before the first game of the season he said, I am going to pick your brother in the 17 this week, I have to pick him, well I said I’m not the coach, you pick him then.  Jason Keogh was unavailable as he had to go to a wedding and Geoff spoke with me again he said I think Bulla (Nathan) has to start, I said Geoff we are playing Souths at Davies Park, it is not real nice to play them first up, that’s a big call.  I said to the old man I would like to see him start off the bench, but from the start he was straight into it and he went alright.  Another player worth a special mention is David Seage he was brilliant.   John Elisaia could have been anything also.

Question 17: What was your opinion of Nathan Croft being axed from Wynnum Manly’s Top 17 for the 1995 Grand Final?

Clayton: You got to pick your best players and obviously he wasn’t one of the best players.  Crofty was starting to get big then, he was blowing up a bit.  The coach said “I don’t know what position to play him and I don’t know where to put him” I told the coach front row.  He always thinks he played in that game, but he didn’t.

Question 18: Who do you think is the best modern-day footballer?

Clayton: I’m a Queenslander, but I like Boyd Cordner, he talks alright and leads by example.  While there are a lot of good backs such as Munster, Wighton and Tedesco and all those other show ponies, being a forward I am not picking a back.  Boyd Cordner is not a grub, he is a bloody good footballer.  Tyson Frizzell and Damian Cook are also worth a mention.

Question 19: You played a game against Ipswich and you decided to mention to Brad Nairn while making your way up the tunnel, on how you were going to iron out Ipswich player Chook Fowler.  You said to Fowler before the match started “I going to smash that Fowler when he takes up the ball” what happened next?

Clayton: We got a penalty in the first ten minutes of the game and the boys said Chook Fowler is a bit pumped up, I pushed everyone out of the way, I said watch out give me the ball, tap it give it to me, I am going to run straight at him.  My head went backwards one way and my legs went the other way and the ball went up in the air, I got up off the ground and went back to the line a bit shaky.  This was a serious game the boys were all having a giggle, Nairn’s laughing his head off and I said aren’t we all playing on the same team guys.  I said to Brad Nairn – I won’t be doing that again!

Question 20: What has life held for you after football?

Clayton: I met my wife Melissa at Ron Troutman’s 30th birthday party at the Bulimba Hotel and got married in 2007.  I have two beautiful girls Kayla and Charlie and I spend most weekends at netball and swimming.  I started working for Lew Doyle on commercial sites and decided to go out on my own and I now have my own bricklaying business.  In my spare time I still enjoy a drink and a punt and try to stay away from Nathan Croft if I can. 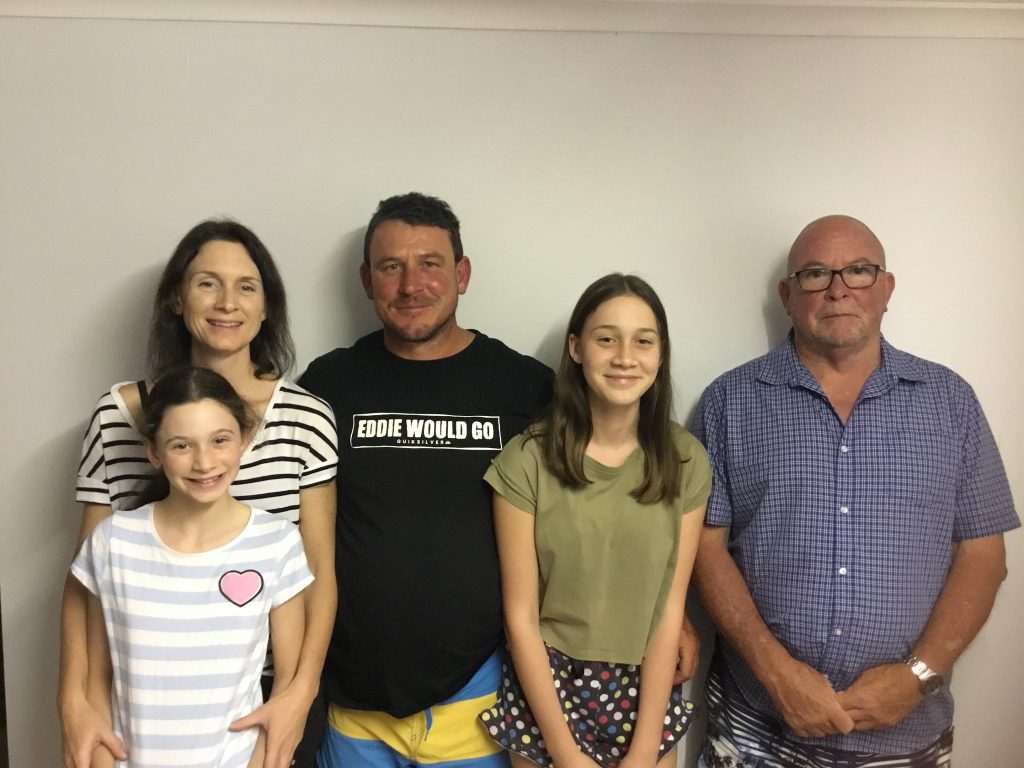