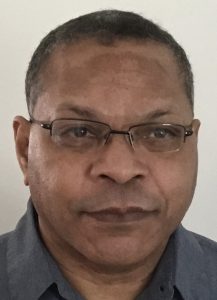 Question 1: Phil you grew up in Wynnum as a local kid, where did your love for Rugby League start?

Phil: Hearing about it through my Mum and Dad in our family home, going over my Auntie’s house and seeing Rugby League photos all over her wall, reading newspaper articles on the game and seeing others play it at school.

My family history also played a part as my Aunty was married to the first Wynnum Manly coach Abby Thurlow.

Question 2: Did you make any representative sides when attending Wynnum North Primary School?

Phil: I made the district rep sides, played in a few undefeated teams at Wynnum North State School and won two Metropolitan Grand Finals in 1968 and 1969 at Lang Park.  The 1969 final was drawn at full time and we had to play five minutes each way extra time, if it was still drawn then we had to come back on the Tuesday to replay the game.  The first five minutes of extra time and it was still drawn, we were lucky enough to score a try in the final minute of extra time to win the game.  The try scorer was Mal Clark it was a backline movement.

Nev Rice use to have us train these backline movements under a stopwatch, Nev use to utilise stopwatches and always recorded the players tackle counts. He was well before his time and he turned us into a regimented rugby league machine.

Question 3: You played your first year for the Wynnum Manly Juniors in 1969 at Kitchener Park, did you have any success in your Wynnum Manly junior days?

Phil: I started in 1969 and played Under 12’s and finished playing in the Under 15’s, however I still played school football in my senior years when attending Iona College.  In the representative teams I played with David Green and Mal Clark.  We never had a lot of success in the juniors the competition was very strong, particularly Easts Carina.

Question 4: Why did you take a break from junior club football for 3 years what was the reason for this?

Phil: I took a break and went surfing for three years, which I always had a love for.  I used to surf at Stradbroke Island and the North Coast (Sunshine Coast).  I was playing two games a week and I just needed a break so from 1975 to 77 I went surfing.

Question 5: I believe when playing first grade for Wynnum Manly you once had a player from the opposition perform the squirrel grip hold on you?

Phil: Oh yes, this Valleys player is one of the most well-known players in QLD.  I said to him “come on (players name), handle it” and he was not expecting me to say that to him.  Now that I think about it and when I think about it in hindsight, it was the wrong words to use, as he was handling it!

Question 6: Did you excel in any other sports other than Rugby League?

Phil: Athletics, I still hold the 100m grass record, the record I held was on grass as the surface changed the following year.  That was in the Associated Catholic Colleges competition.  I was lucky I held this record before everyone had their growth spurts.  The fastest player I ever played with at Wynnum over 50 metres was Greg Perrett. 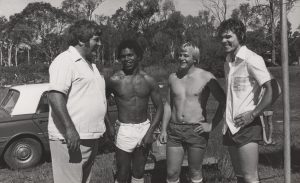 Question 7: Do you recall an incident between Ross Strudwick and Ray Duncan when playing Valleys?

Phil: We were playing against Valleys at Kougari Oval and Ross Strudwick they didn’t call him the rat for no reason, as he use to get under everyone’s skin.  Anyway, something happened from the scrum and Ray Duncan has just gone whoshka and laid him out cold.  Eddie Ward was the ref and called him over, all I could hear from my position was “Tank” pointing to Strudwick who was still on the ground, he’s a “Dirty #*%!”.  Referee Eddie Ward has just gone off, off you go.

Question 8: Who was the best player you played with?

Phil: Wally Lewis for sure, with his ability to read a game and his shear presence inspired you to play the best every time you took the field with him.

Question 9: Who was the best player you played against?

Phil: Arthur Beetson, he had such a reputation, he was a big man and watching him play in the Sydney Rugby League as I grew up on television.  Beetson had the best ball skills they were just to die for.

Phil: I always took note of what Lionel Morgan was doing, because he was from the Wynnum Manly district.  I had a few from Sydney also, as my father use to bring home the Sydney newspapers in which I would read the sport.

Question 11: Who was the hardest player to tackle?

Phil: Mal Meninga, he was strong and had very strong thighs.  I always tended to go around the hips and slide down and he had such a long stride and at full pelt was very hard to bring down. 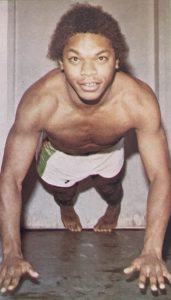 Phil Attel in full training for the 1979 season

Question 12: Who was the hardest tackler?

Phil: I have been hit in some bell ringers, you would hear that bang and things would go black.  I woke up once in the Lang Park dressing rooms when Mark Murray hit me with an elbow.  There was one guy from Eastern Suburbs every time he hit me, I would feel it his name was Cavill Heugh.  The best two players I played with that could tackle was Mal Green and Bernie Ernst.

Question 13: What was your favourite position?

Phil: Fullback, just the freedom of playing in that position, you had to be super fit to cover everything.  You could always roam attack wise if there was not a set play.  Nev Rice was the reason I first played fullback and told me that it was the best position for me.

Question 14: Who was the best player you ever saw wearing the Wynnum Manly Jersey excluding Wally Lewis?

Phil: Nev Hornery, his leadership and inspirational play, he totally galvanised the Wynnum Manly Rugby League community.  I would watch Nev destroy sides either at Kougari Oval or on the ABC match of the day in 1974 and 75.

Question 15: What were your recollections of Wynnum Manly winning the 1982 Grand Final?

Phil: We all went to the game and watched it was outstanding, unfortunately I had commitments that night and could not join in the festivities.  It was a great day that no one will ever forget.  The whole area just was enthralled.

Question 16: You were recognised as one of the smallest footballers in your time, how did you cope with that playing in such a big man’s game?

Phil: I found out early in my career I was blessed with quick pace and a strong body and was pretty injury free.  I always moved my body into tackles at speed, I always tried to negate their force.  I think I was fortunate that my physical makeup enabled me to cope with the hits.  I got thrown some hospital passes at times and referees would watch me just get flattened and I would just get up.  I remember getting thrown a hospital pass from Jeff Gronvold, it was the hospital pass to end all hospital passes, I knew it was coming, so I turned my back and the force was so great I hit the dust.  I remember the referee coming over and telling me to stay down, we will stop the play, I just got up and played the ball.

Question 17: If you could change anything with the way rugby league is played today what would it be?

Phil: There seems to be more athletes not footballers, admittedly I have enjoyed the way the game has changed this year with the new rule changes.  There are less off the cuff footballers as there is now so much structure. 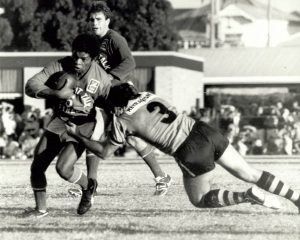 Question 18: What was the funniest thing you ever saw on a football field?

Phil: It was a lower grade match at Kougari Oval and we had a centre named Wayne Eadie and he was a good footballer.  We were deep in our half when the five-eighth made a break and fed it to Wayne, he just took off towards the try line, but the referee called it back for a forward pass.  He then went on to beat the lock forward and fullback cover defence in a great individual effort he ran around from inside the corner post and put the ball down under the sticks.  The referee was not happy as he had blown his whistle so many times and Wayne had ignored him.  We then explained to the referee that Wayne was deaf and would not of heard his whistle.

Phil: It may surprise some, but I am am going to nominate a guy who also had four or five other brothers that played senior football for Wynnum, his name was Robert Legge.  He was an outstanding defensive centre, when I first made grade football, his defence used to blow me out.  I received pointers from him on defence and defensive structure he was also very fast.  When at school participating in the district school carnivals he would always win the sprints against some outstanding opposition.  He was one guy for me that never reached their true potential.

Question 20:  What did you do with yourself after your football career finished?

Phil:  Straight after football I got my coaching certificate, I sat in the same class as Gary Seaton and Brian Niebling. However, I never went onto coaching at a serious level.

Work wise I was working in fitness centres, whilst increasing my knowledge with courses in fitness.  I then stated doing some tertiary study as you could appreciate it was mainly about sport at school and I never applied myself to any study.

I then went onto to study for the next ten years doing diplomas, undergraduates and postgraduates degrees.  I spent plenty of time in the gym during this period to assist with injuries received playing football and surfing.  After completing a bachelor’s in business, human resources and a master’s in business degrees, I then started administration and management work.  I really enjoyed people management.

I left the Wynnum Manly area in 1998 and moved to Fortitude Valley as it was closer to work and where I was going to study and I still live there today.  In my spare time I still liked to surf and fishing at the Southport Spit and go over to Straddie on a regular basis with some fisherman. 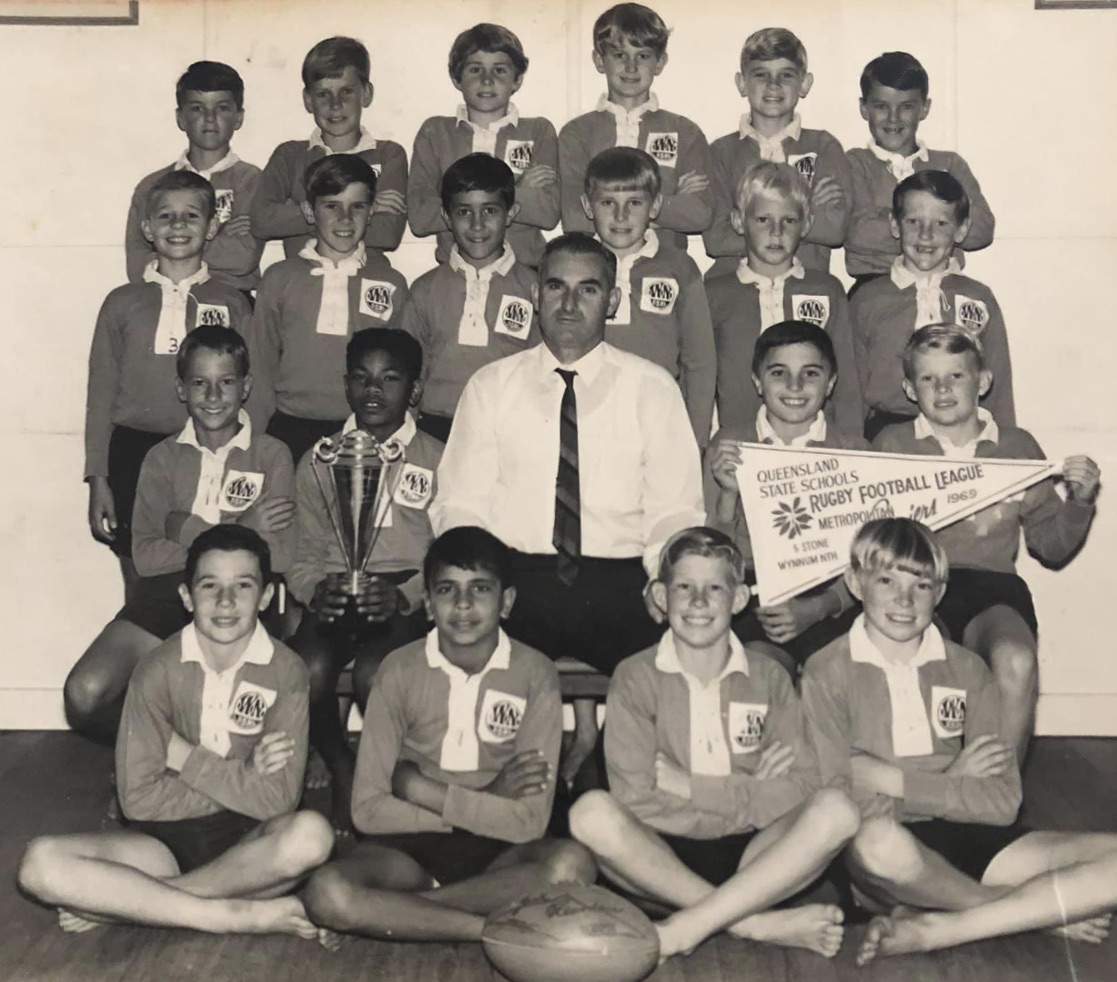